Gasoline snow blower Huter SGC 4000Designed for clearing small territories from snow. Self-propelled, there is a 4 stroke 6.5 hp gasoline engine The width for one pass is 56 cm. Auger with teeth grinds dense snow. Thanks to the deep tread, the wheels do not slip under the ice, ensuring the machine’s good patency. Turning the gutter is regulated by a special lever.

The working system of the snow blower Huter is a snow trough with a screw, as well as a fan in the form of a impeller and a trough for the release of Snow (except SGC 3000). The unit is powered by a four-stroke piston single-cylinder internal combustion gasoline engine with air-cooled.

Advantages of the snow blower Huter:-Engine 4-stroke, gasoline with the upper arrangement of valves, adapted to work at low temperatures, has enough power to freely cope with all loads associated with the working process of the snow blower and its movement. Is completely autonomous and does not need foreign energy sources, which makes the snow blower Mobile-Huter snow blowers are self-propelled (except SGC 3000 model) and are equipped with leading inflatable wheels, having tires with a pronounced winter protector, which ensures reliable contact with the surface even in the conditions of ice and makes the operation easy. The SGC 8100c model is equipped with tracks, which gives even greater patency-Electric starter (SGC 4800, 4800v from AKB 12 V, and SGC 4000e, 4800e, 6000, 8100, 8100c from the network 220v) allows you to start the engine without unnecessary effort-Adjust the direction of snow release through the handle allows you to do it quickly, almost on the go-Durable metal auger blades make it easy to grind even tracked and frozen snow and reduce it in volume-Restrictive shoes around the edges of the receiving trough protect it from damage and allow you to adjust the height from the surface to its lower edges, which allows you to use snow blower on different surface-Bright headlight will allow work in winter twilight (SGC 4000L, 4800, 6000, 8100, 8100c)-Heated arms (models SGC 8000, 8100 and 8100c) it makes it possible to manage the snow cleaner without special equipment in the Frost-The Planetary mechanism on the model 8100c makes it possible to slow down one of the wheels. “Hooks” on the control panel, include a differential and suspend the appropriate wheel. As a result, the snow blower unfolds itself, the operator does not make any effort-Cut pins for protection of working organs-Engine with special, winter, air filter, facilitating work in severe frost-Adjustable direction and height of snow release-Chrome coating of Piston Group

When working with a snow blower, it is important to remember:-Speed switching should be carried out at a complete stop of the snow blower and a lowered stroke drive lever.-Engine running and idle operation can damage the snow blower and increase the wear of the screw drive belt.-Operation at a temperature above 0os is possible, but we do not advise, because. The snow becomes “sticky” and clogged the ducts.-Adjusting the cables is important, affects the resource and should be carried out by specialists.-All snow blowers Huter have a paper filter element and at temperatures about 0os can wet and icing. In this case, it should be removed and “dried”.-If the snow sweeper is stored in the room, after work it is necessary to clean it from poured snow. 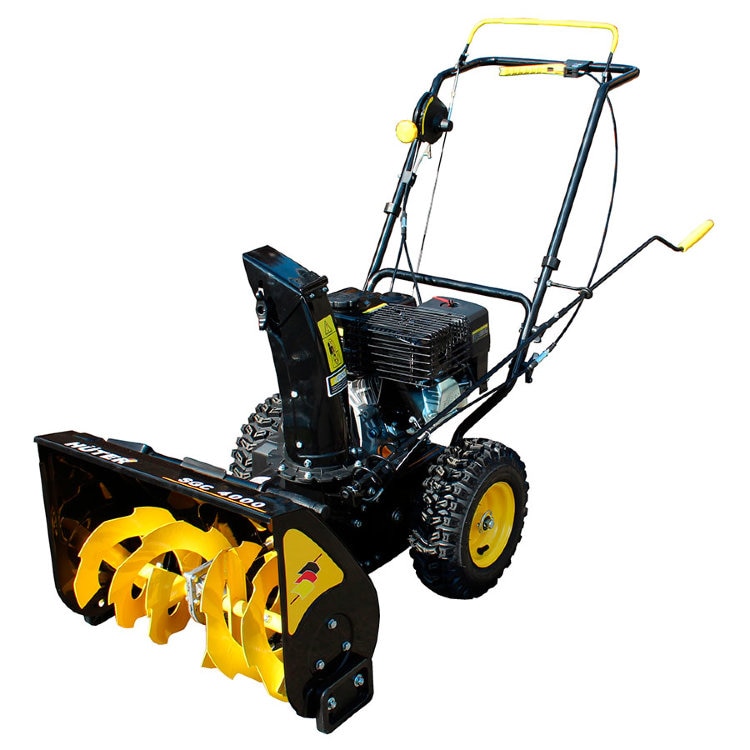 There are no reviews yet.

No one rejects, dislikes.

It has survived not only.

All the Lorem Ipsum on.